Enlightened Living: A seamless blend of three pathways for self-control.

In a literal sense, life is the process from birth to death, where birth implies the time when heart starts pulsing and death is when the heart stops  pulsing permanently. If that is your understanding and you are satisfied with such clinical definition, you are likely to be one in a million or may be even one in a billion!

Are these activities chosen at will or do I let the activities determine and define who I am? In other words do I choose to act based on a preceding reflection and analysis or do I merely react? It is this unique ability – the ability to choose what we want to do at any moment – that distinguishes any of us (as the human species) from all other objects in the universe.
It is always wise to think before you act, look before you leap! But what do you want to think about, what do you want to look for before you leap?

A committed effort towards reflection, analysis and finding answers which lead to conscious choice of our activities, can be summarized as Enlightened Living. For such a choice, one needs an awareness of who am I, the entity who wants to think, who wants to look before leaping? what are my choices? what is my process for analysis and decision making? Reflection in wards to find answers to these and many related questions is called Self-control or Yoga (union with the self).

The many facets of enlightened living are detailed in various scriptures like Bhagawath Geetha, Upanishads, etc. We have discussed various aspects of such enlightened living in many of our earlier essays. They are illustrated schematically in the figure below: 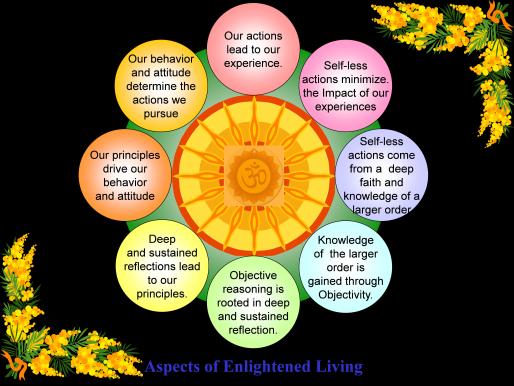 Enlightened living occurs only through three pathways: our body and its capability to act or engage in physical activities, our mind and its ability to feel or experience the emotions and the Intellect through which we think, reflect, reason and analyze.  The three pathways are described in the scriptures as : Karma Yoga (which emphasizes self-less action), Bakthi Yoga ( which emphasizes faith and worship leading to a state of mind without duality such as like/dislike, love/hate, etc.) and Gnana Yoga (where the intellect is held in check with the single minded thought that I and the Universe are integral in each other (Thath Thwam Asi).
All three pathways of enlightened living co-exist. There is no body function devoid of mind (and the emotions) or intellect (and the thoughts). This continuity of the various facets of enlightened living is illustrated in the figure below:

The cyclic process of enlightened living leads to Self – Realization. What happens after that? This confusion arises when we think of the three pathways of self-realization as a linear sequence. But, what happens when the three pathways are inseparably inter-connected? The living human body consists of muscles, nerves and blood veins. We can recognize each independently. We can treat or correct each on its own accord. Yet, the living person is an embodiment of all these three aspects of human anatomy working in unison. The same can be said of the three pathways for Self-control (Yoga). This is illustrated for visualization as shown in the figure below. Self – realization remains the center (the intent, heart and soul) of such an enlightened person in every aspect of his/her living.

The enlightened person conquers birth and death even in this world! He/she has reached the state of unattached existence (Brahman). Such a person has neither faults nor equals. Hence discrete events such as birth and death do not occupy his mind.               B.G.  5. 19.
Such a person neither rejoices on obtaining his/her likes, nor grieves when the dislikes are bestowed, remaining steadfast in the unperturbed knowledge, knowing that he/she as a person resides within the laws of nature (described as the Brahman residing within the Brahman).                       B.G. 5. 20.
Having disconnected oneself through the process of non-attachment, he/she finds happiness of eternal nature, through the union with the Brahman – the concept of total self-control and unattached active participation.     B.G. 5. 21.

Any person, with detachment from external objects, with eyes focused steadily and with control of all body functions, sense organs, mind and intellect, focused on sustained contemplation on the laws of nature and their interactions, thereby totally freed from desire, fear or unrelenting anger, is a liberated person.                       B.G. 15. 27, 28.

This entry was posted in Uncategorized. Bookmark the permalink.