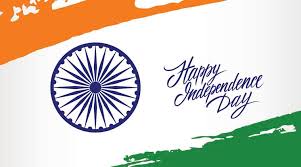 August 15th is celebrated as the Indian Independence day each year. Our greetings on this special occasion to all the Indians and the well-wishers of India. This gives us an opportunity for solemn reflection on “what is independence?” and “why should we celebrate independence?”

We start with a bit of Google search.

An Independence Day is an annual event commemorating the anniversary of a nation’s independence or statehood, usually after ceasing to be a group or part of another nation or state; more rarely after the end of a military occupation. Most countries observe their respective independence days as national holidays.

The link below tabulates the Independence Day for many nations. https://en.wikipedia.org/wiki/List_of_national_independence_days Curiously enough this table does not list any date for “independence day” for United Kingdom.

On further search we find the following information:

Britain has no unique national day. It has a number of days of celebration which go largely uncelebrated, and others which are associated with the constituent countries of Britain. The latter category includes St George’s Day in England, St Andrew’s Day in Scotland, St David’s Day in Wales and St Patrick’s Day in Northern Ireland.

At present, the Queen’s Official Birthday is marked as a de facto national day by British diplomatic missions overseas] but not in the UK itself.

As one can see “Independence day” is a historical artifact to commemorate the liberation or freedom from the oppression or rule by a higher power. It is day of proclamation that we are “Free at last” as declared by Marin Luther King Jr.

Independence Day is a symbol that brings to our realization what we have as freedom and what we should protect, cherish and enjoy for the benefit of all.

What does Independence Day convey to us from the perspective of Spirituality in Practice?

The spirit or consciousness is reflected through each of us as individuals. To the extent we see ourselves as individuals we are divided by our identity. Such identity can come from our name, relations, family, nationality, etc. Such identity can also come from our size, date of birth, weight, appearance, body functions, health, preferences, etc. The more such identities prevail, the more we feel oppressed, driven by forces beyond our control. Emotions and dualities of happiness/sorrow, like/dislike, friend/enemy, etc. control and overwhelm us. Each of us feels that we are “dependent” on something, someone or some “other”!

Vedanta or the “Essence of Vedic knowledge” teaches us that the spirit or consciousness is the same indivisible presence every where. There is “no other”. This is declared as “Thath Thwam Asi” – You and the universe are integral in each other.

Can you envision anything, any one or any event, experience, object, …. that is not a representation of the laws of nature? Even your envisioning, imagining or describing anything is also a representation of the laws of nature! Anyone who sees the oneness of everything in the laws of nature (Brahman) can also see himself / herself as a part and parcel of nature. This understanding will lead that person to declare Aham Brahma –  “I am Brahman”. With that declaration and remaining in that state of understanding each person obtains his Independence from the forces of duality such as like/dislike, friend/enemy, etc. which otherwise control and overwhelm us. In those moments we are “independent” of something, someone or some “other”!

This raises the question: “Isn’t the spirit or consciousness that lives in my body during my life and travels some where after my death”? This would be like an immigrant claiming one nation hood at birth and another after leaving that country to another. It would also be like someone carrying visas for travel from one nation to another. But, aren’t we all people no matter which nation we were born at, travel to and live in? Aren’t nations’ merely artificial boundaries drawn for certain immediate practical reasons to create dependence rather than the true independence of the person? Birth and death are mere biological markers (like passport or visas) of the biological laws of nature at work. Between these markers we experience “life” just as we experience “citizenship” or “residence” as long as the passport or visa is valid!

Any one is an Indian to the extent we believe and practice the values of India as a nation. Spirituality in practice is a value given to all of us – for all citizens of the world – for our individual independence from the forces of duality.

As we have noted above England, which gave the purpose for so many nations’ Independence Day has no national day of its own! While we celebrate the Indian Independence Day – which one should for historical reasons – we should also create our own individual independence day, when we reflect on principles of Vedanta, the true and eternal knowledge given to the entire world by our fore fathers.

This entry was posted in Uncategorized and tagged Independence day. Bookmark the permalink.